Sewing machines are complex pieces of machinery that require a lot of care and maintenance to keep them in good working order, and that includes the sewing machine needles.

There is nothing worse than getting halfway through sewing a garment, only to find out that the sewing machine needle has broken or the bobbin thread has run out!

In this blog post, we will give you some tips on how to fix broken sewing machine needles.

This is one of the most common sewing machine problems so becoming familiar with it and knowing how to resolve it will make your sewing projects more successful.

What is a sewing machine needle?

Basically, a sewing machine needle is a thin and pointed tool that sews fabric together by piercing the threads of one or both pieces of cloth.

It is a needle especially made for sewing machines. It is more sturdy than your average needle.

The sewing machine needle can be made from metal, plastic, or other materials depending on what you are sewing with. 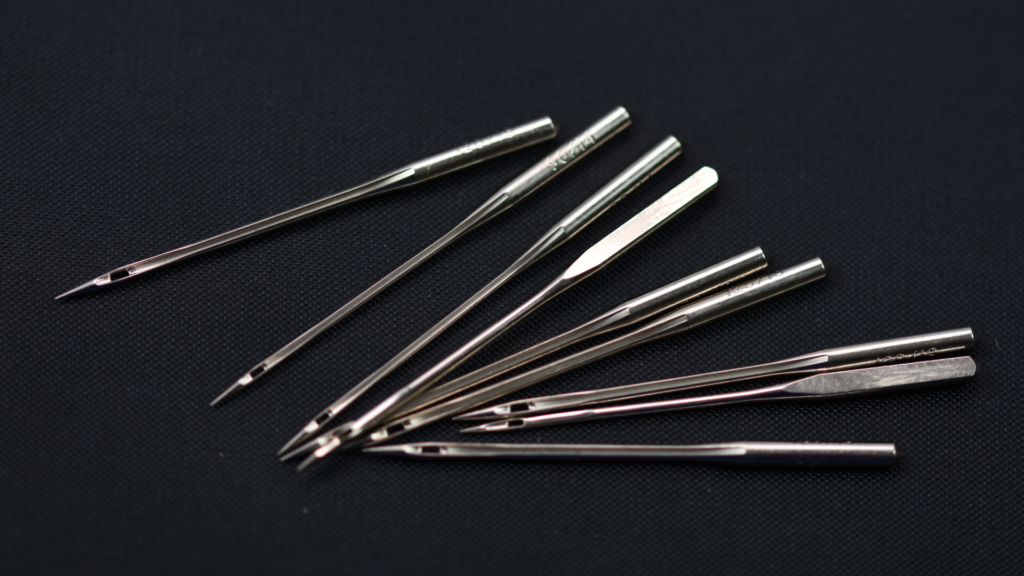 Different types of sewing needles have different eye shapes which dictate how they work in relation to the bobbin threading process.

Choosing the right type of sewing needles is actually the first step of avoiding any type of sewing machine problems that has something to do with needles.

As you gain more knowledge and experience, knowing the right type of needle to use will become less of a problem to you.

As sewing machine needles are so small and fragile, they can easily be broken or bent while sewing. This is most common when sewing heavy fabrics such as denim, leather, etc.

However this problem can also occur if your sewing needle has been used too often without being fitted with a new one (the metal around the shaft of the needle becomes worn down). In this case, you can simply replace it with a new one.

When your needle breaks or bends while sewing, stop sewing immediately.

In cases where there’s no visible bend in the sewing machine needles and only slight scratching on top of fabric then it may not need changing.

How often should I change my sewing machine needle?

The sewing machine needle should be changed every three to five hours of sewing time.

When the sewing needle becomes dull, it will have a tendency to scratch across fabric and cause more damage than when they’re new because the metal around the shaft is worn down.

This could lead to broken needles and fabrics as well if you continue using them without replacing them with a new one.

If there are no visible signs that your sewing machine needs changing then just keep an eye on it while sewing for any scratching or bending in the needles.

When this happens, replace sharpened sewing machine needles immediately before continuing work on your project so there’s no risk of ruining what you’re working on! 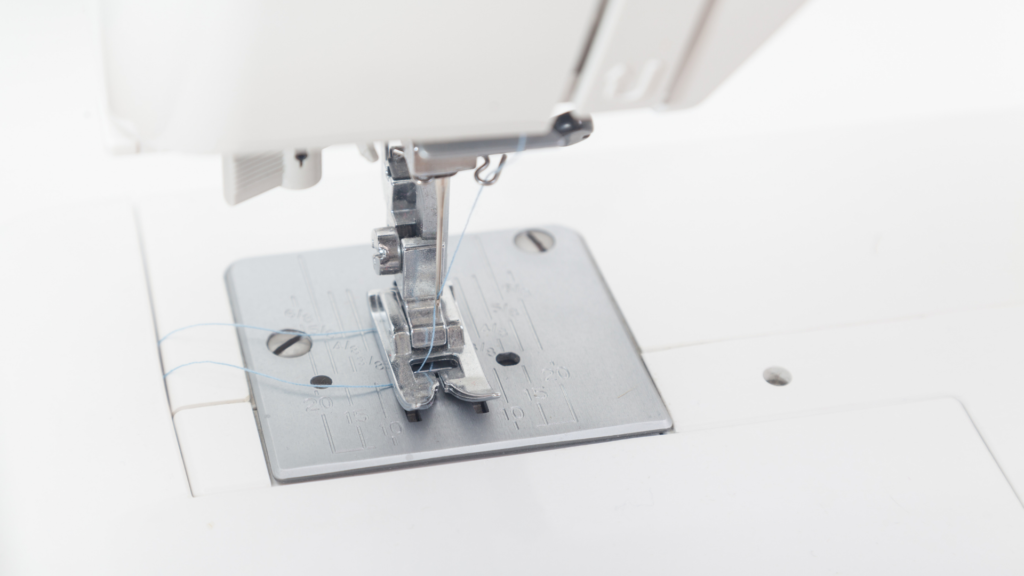 Make it a habit to use a new needle for each new project, and have sets of backup needles ready if you find yourself working on a lengthy amount of time on a single project.

Remember, if the needle is bent from overuse then it’s time to replace them with new sewing machine needles!

How do I replace sewing machine needles?

To replace sewing machine needles, first remove the needle plate from the sewing machine. Then use a flat head screwdriver to pry up and release the clamps that hold down your sewing foot pressure bar.

Next unscrew each of the screws along with removing any clips or springs you see in order to expose where your sewing needle is going into its slot on top of the sewing belt.

Once all those parts have been removed, slide out your old sewing needle using one hand while guiding it with another piece of cloth so as not to accidentally drop it.

Lastly, press firmly against your new sewing needle until it snaps securely into place at both ends – then re-attach everything else by reversing their removal process. Re-thread, and then continue on with your project.

If none of this worked, what you can do is gently pull your sewing needle out and then push it back in again.

If this still does not work, you can try sewing a small piece of fabric to see if that helps with the problem.

If even after doing all these things, the old sewing needle is refusing to cooperate with you for some reason, use pliers or tweezers to grab hold onto the sewing needle as close as possible on its side without touching any other part of it before pushing it back into place while making sure no parts are bent or broken off inside.

The key point here is slowly but surely approaching every individual step – don’t rush through anything because rushing will only cause more problems when they didn’t exist before.

This can lead to a need for replacement sewing needles and also an end product that isn’t up to standard because of bent or broken sewing needles.

How do I know if my sewing machine is breaking my sewing needles?

If you’re noticing stitches in your end product where only one side has been sewn through while another part remains unstitched, then this could be indicative of bending on the needle due to lack of support from its fellow parts during operation with a running seamstress’s foot pedal pressed down.

Another sign that you should look out for is sewing needles that have become chipped or broken at the point. 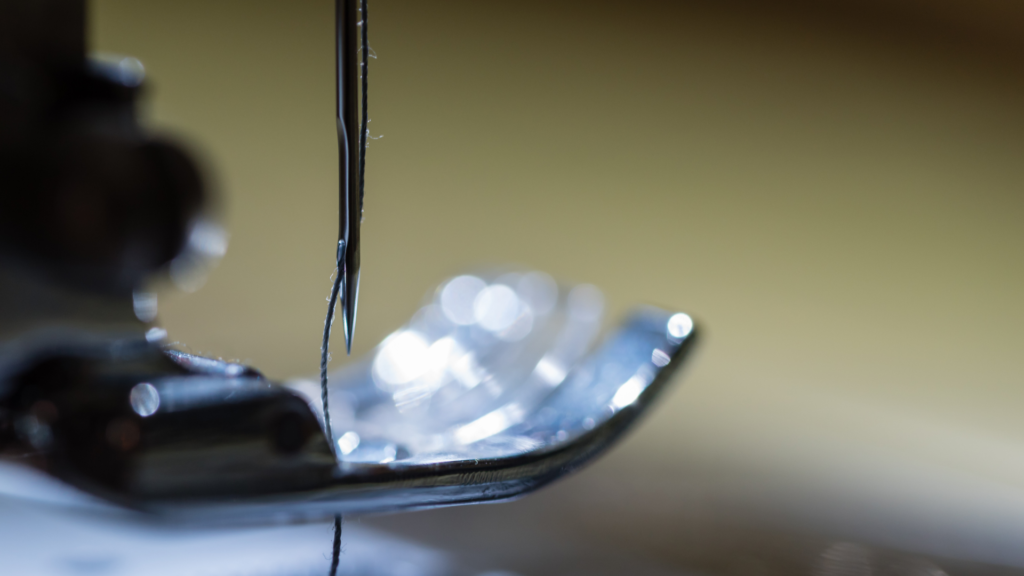 When you’re sewing and notice that your needle has bent ever so slightly then try stopping sewing for just a moment to see if it gets back in line. If the needle continues to bend every time, contact customer service and ask them what might be causing this problem.

Some potential causes include:

In addition to those tips, there is always at least one spare set of sewing machine needles included when buying new ones.

In this case, it would be better if you contact a sewing machine professional to look at your sewing machine and repair it if it needs urgent repair.

The Key Differences Between Serger And Sewing Machine

How to Fix a Sewing Machine Jamming Problem

How to Do Satin Stitches Easily on a Sewing Machine