Sewing machines are supposed to be dynamic and easy to use, but sometimes they can get stuck. With this we mean that you notice your sewing machine motor runs but its parts aren’t moving.

It can easily be frustrating when you don’t know the cause of this problem, how to fix it or what you should do to start fixing it.

When a sewing machine freezes, it’s usually because of these three reasons: the fabric is too thick (and gets caught under the needle plate), there’s an excessive lint buildup in the bobbin case or on/in the feed dogs, or something is wrong with your sewing machine.

In this blog post, we’ll talk about how to unfreeze a sewing machine when one of these things has happened.

The Fabric Is Too Thick

When you’re working with thick fabric, it often gets caught under the needle plate and pins it down.

This causes your sewing machine to freeze up, as if you were pressing on a pedal with no movement from the motor below.

The first thing you should do is start by removing whatever fabric has gotten stuck under the needle. But be careful when removing the fabric! You don’t want to bend the needle and break it.

After you have removed any fabric that might be stuck under your needle, make sure there isn’t anything trapped in between the machine’s feed dogs or on top of them.

Usually, there’s an object that’s stuck between those parts that causes the machine to freeze. Sometimes, it can be a piece of fabric that has bunched up and become stuck over time.

If you really need to work with thick fabrics, what you can do to avoid the machine getting stuck is to use a zigzag stitch. Sewing machines will have trouble sewing through thick fabrics if straight stitches are used. 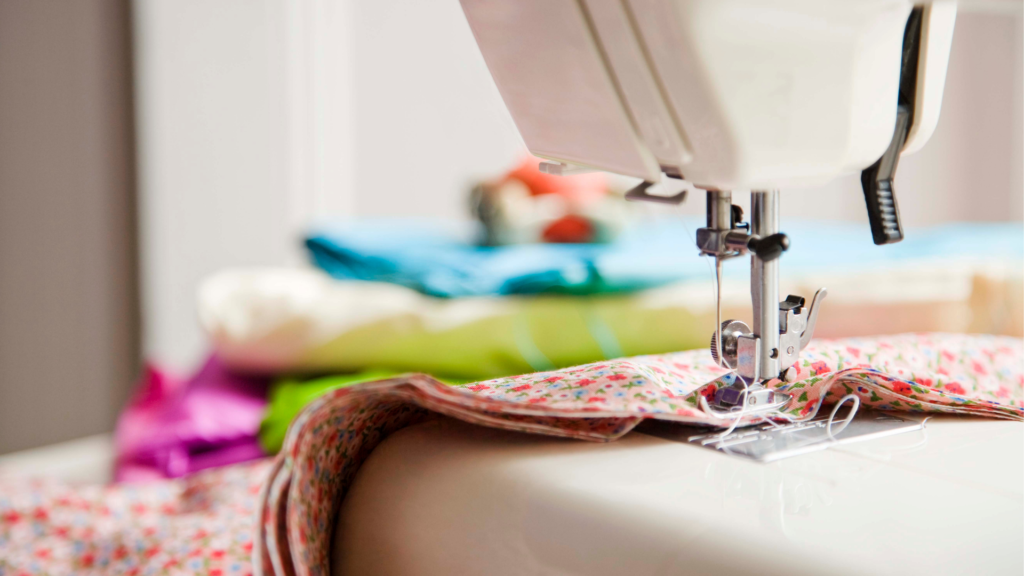 So in summary, here’s what you should do if your fabric is too thick:

If you’ve checked all these parts for anything that’s stuck or trapped under your sewing machine needle with no luck, return back to step one! You’re going to need to remove any remaining clothing from under the needle before proceeding.

If you thoroughly checked those areas and found nothing that’s stuck, wrong, or unusual, then open up your sewing machine case and look for lint buildup around where the thread spools are located, in other words, the bobbin area.

Turn off the machine and remove the bobbin case from its place. Then grab a nylon brush to remove any lint or dust that might be causing this problem.

If you find any lint or dust, simply brush it out of the machine and then carefully push your thread spool back up to its proper place so that there’s no more buildup in that spot.

You can do a quick check by trying to manually turn the sewing machine needle at this point with your hand.

If it still doesn’t move, go back through all these steps again until you have fixed whatever issue was blocking the sewing machine needle before.

At this point, you can consider oiling your sewing machine so that the motor and the machine parts will run more smoothly once you resume working on your project. 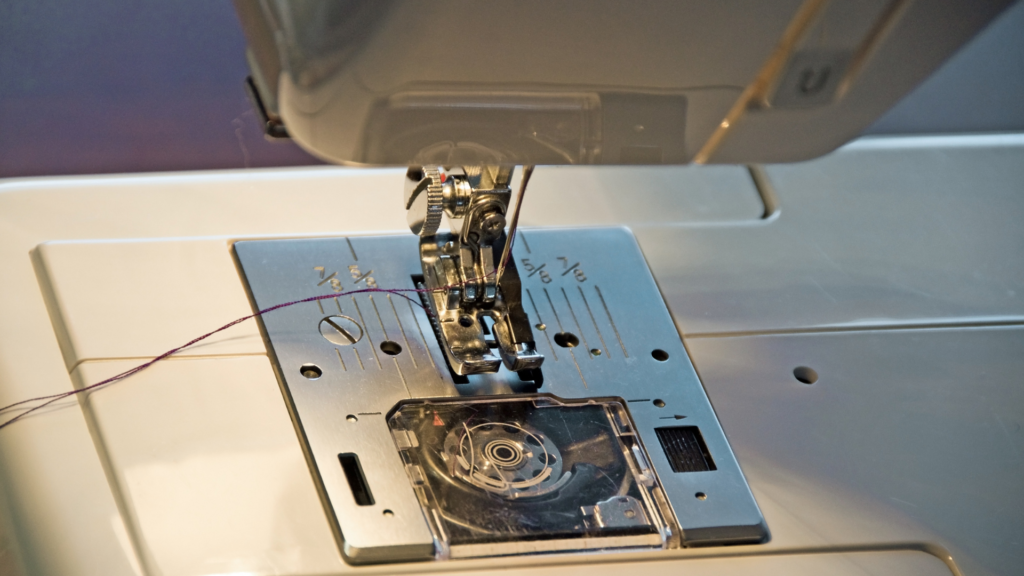 In summary, here’s what you should do when there’s a lint buildup, step-by-step

If you’ve done all these and the machine is still frozen, it may be because of other factors.

Other Reasons As To Why The Sewing Machine Freezes

There are more than a couple of reasons that cause a sewing machine to get stuck or be frozen.

It’s worth mentioning that it might be because of the more technical parts of the sewing machine like the pulley assemblies, the tensioner, and the drive mechanisms which are responsible for keeping the right tension in the machine. You can solve these by cleaning and lubricating these parts, or enlisting the help of a technician.

A sewing machine also freezes if it’s not used over a long period of time. This is due to the accumulation of dust and other particles such as threads and fabric inside the machine. It could also possibly be that the thread was left tangled in some parts.

It might also be because of an electrical short caused by some loose wire or a broken connection, which can’t be fixed unless you replace it with a new one.

Sewing machines also freeze when they’re overloaded with too much sewing work for them to handle. This is more likely if the machine’s not been used in a while.

Another reason as to why your sewing machine would stop working could be that it overheated due to being left on for extended periods of time or overwork without any breaks. You should turn off your sewing machine before leaving it idle so this doesn’t happen again next time around!

Lastly, we want to mention that there are actually cases wherein someone accidentally damaged the sewing machine and made it stop working. This is an issue that might be due to a person’s carelessness, so you should always check for signs of damage before using your sewing machine again. For example, someone has spilled water over the components of the machine. 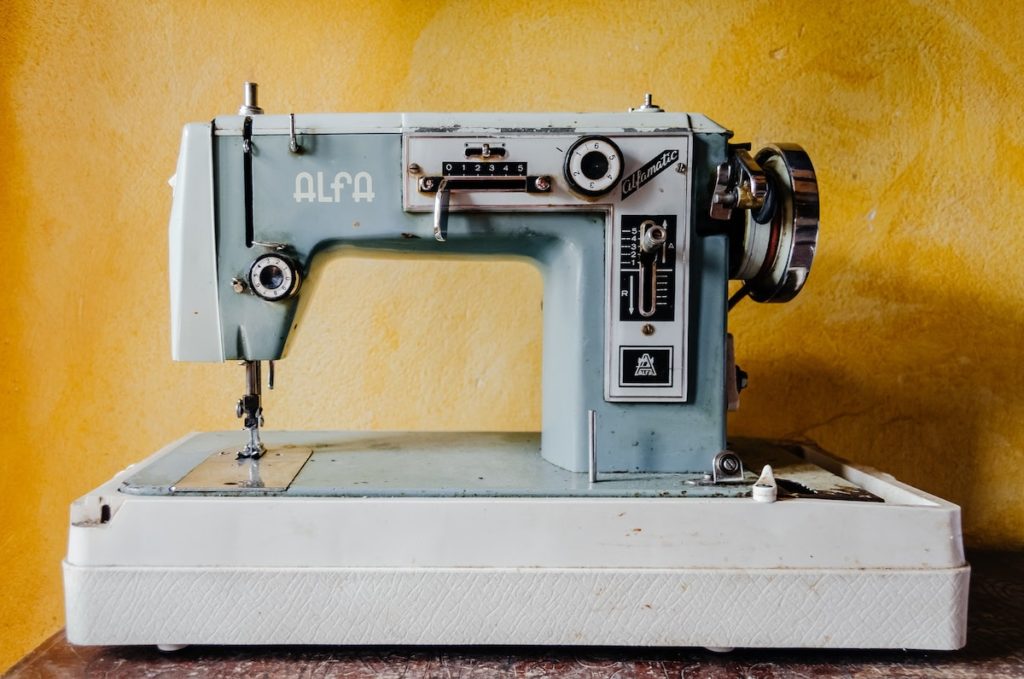 In conclusion, there are a number of different reasons as to why the sewing machine freezes up. The key here is to identify what the main problem is before doing any fix.

Sewing machines are not complicated, but they’re also quite delicate. So you have to be careful because you don’t want any similar thing happening again next time around!

With that said, we hope this guide on how to unfreeze a sewing machine has helped you! Let us know if you found any other way of fixing it.

A Beginners Guide To Threading A Singer Sewing Machine [2022]

What You Should Know About Straight Stitch Sewing Machine