Sewing machines are a big help in lengthy, tedious sewing projects, even for the quick small ones. In our modern-day busy schedule, we can use all the help we need to save some time and labor. But have we ever wondered how a sewing machine works? Some of us have. And when we know how it works, it’s easy to find the reason for the problem in times of complications. 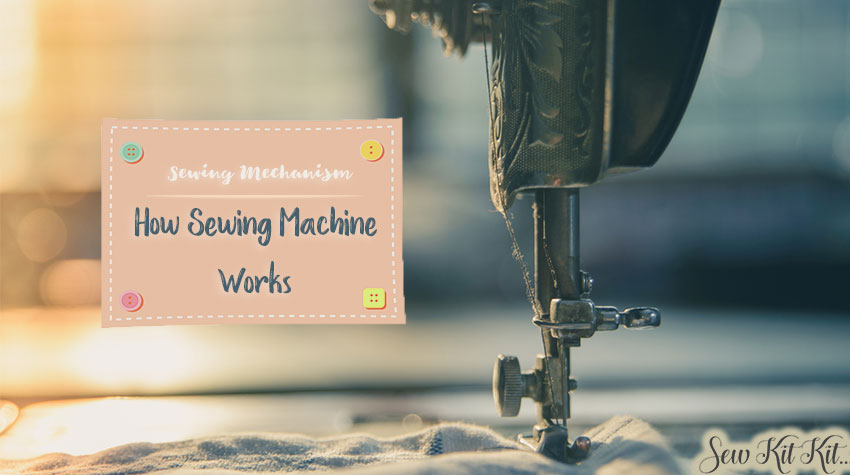 A history lesson can be very boring, we know. So, we are just going to peak through the most important events in sewing machine history.

It all began in 1755 when a German immigrant, Charles Weisenthal, got a British patent for a needle suitable for mechanical sewing. He didn’t make the full machine, so we are moving on. In 1790 English inventor and cabinet maker patented the machine that had an awl that made a hole through leather or canvas and allowed the thread to pass through it.

He never built a machine and later attempted to make a machine from his drawing unsuccessfully. After that, in 1810, German inventor Balthasar Krems was said to have made a machine for sewing caps. But he never patented his invention. Later, Austrian tailor Josef Madersperger in 1814,  Thomas Stone and James Henderson in 1904, John Adams Doge, and his partner John Knowles in 1818 has attempted to make machines make sewing easier.

But these are all mostly failed attempts. In 1830, French tailor Barthelemy Thimonnier was granted a patent by the government. His machine was almost entirely made of wood and used a chain stitch for sewing. Then there was another failed attempt by Walter Hunt in 1834. After that, in 1846, Elias Howe made a machine that used lock stitch. But he had a little problem with Issac Singer regarding the patent.

Issac’s machine used an up and down mechanism and was powered by a foot paddle. But it used the same lockstitch technique as Howe’s machine. Singer first produced sewing machines on a mass scale commercially in the 1850s. And since then, it has been developed, and now there are electrically powered machines with different settings to make sewing easy.

There is a needle in a sewing machine that goes up and down. You have to put a thread through it, which will pierce through the fabric. The needle is changeable.

The presser foot is a flat metal attachment near the needle, across it to be exact, which is used to hold the fabric in place. There is a liver near it that is used to lift it or press it down.

This is an essential part of a sewing machine and plays a big role in sewing. It is a metal spool that stays inside a case under the needle and inside the machine’s body. In modern lock stitch machines, the bobbin circles around and creates a loop for the thread brought by a needle to penetrate through. There is a hook in the bobbin case that plays a key part in how a sewing machine works.

This is a lever with a hole through which the thread is passed. This helps keep the tension balanced and helps the bobbin hook make a loop while stitching. This is a part of the thread loop but described separately because it plays a vital part in the sewing mechanism.

Now every sewing machine has one of these knobs to set the tension of your stitches. The tension may depend on how many layers you are using or what type of fabric you are stitching.

Modern-day sewing machines have stitch selecting dials or knobs to choose what kind of stitch you want to use. However, former machines did not have that kind of privilege.

This is the part every sewing machine has. A thin metal rod holds your thread, and the thread then goes through different loops and cleats before going through the needle. This way, your thread doesn’t get tangled, and tension is even all the way.

The handwheel is used for moving the needle up and down.

The feed dogs are metal bars below the presser foot. They help the fabric move after each stitch.

How a Stitch is Made

Remember how we said bobbin, take-up lever, feed dogs are important?  Here it goes. The bobbin is a spool of thread with a case that has a hook attached to it. When the needle penetrates the fabric with the thread going through it, the hook on the bobbin case takes the thread and circles around another thread that is coming out of the bobbin itself, making a loop, while the take-up lever maintains the tension.

The take-up lever brings the thread down every time for the bobbin hook to loop it through. The feed dog moves the fabric after a stitch is done. Each loop or knot made by two threads is a stitch that holds the two fabrics together.

How to use a Sewing Machine

Before, we talked about two threads looping together to make a knot. You must be wondering which two. We shall explain that in this segment.

To work with a sewing machine first, you will have to engage the upper thread. It goes from the spool to a knob and then down the body of your machine as directed in the manual.

The thread will then pass through the take-up lever and will come down to the needle. In the needle, there are one or hooks to pull the thread through. After that, the thread goes inside the needle’s hole, and your upper thread engaging is done!

Before starting to sew, you have to wind the bobbin using the bobbin winder. The bobbin then goes into the bobbin case, and you pull the thread through a slit and through the hole above to maintain the tension.

You will then have to pop it in the machine and bring the thread through the feed dogs to the machine’s upper portion. To do this, you have to hold your upper thread and wind the handwheel towards you once, and the bottom thread will pull through. This is your second thread.

The upper thread penetrates through the fabric when the take-up lever moves the needle up and down. The bobbin hook holds this thread, circles around, and makes a knot or loop with the bottom thread that comes out of the bobbin. This knot is what holds the two (or more) layers of fabric together. This is the lock stitch process used by the modern sewing machine.

It’s unnecessary to know how the sewing machine works to use it, but it will certainly help with some stitching problems.  Earlier in the days, the sewing machines used chain stitch, which only required one thread set. But the industrially produced and used sewing machines use the lock stitch process, which is described here. It requires two sets of threads which makes it more secure. Whether the sewing machine is electrical or mechanical, or even computerized, the main work behind the frame has always been the same.

You may also Read –

Sewing 101: What Is A Low Shank Sewing Machine

How to Thread a Brother Sewing Machine (Guide)