The little spool of thread that fits in sewing machines is not enough for most sewers. To accomplish a single project, you’ll need several large spools of thread. If you are clueless on how to use a large spool of cone thread on your sewing machine, here is a post that will teach you how.

Want to know how to use a large thread spool on a sewing machine? You can use a large spool in four different ways. Spool on the floor, use a makeshift spool holder, work directly from a large spool, or transfer it to a smaller spool.

You don’t need to buy a dozen tiny spool threads when you have a large spool. Continue reading to learn how to use a large spool to make sewing more enjoyable and time-saving.

How To Use A Large Thread Spool On Sewing Machines

Many sewers, particularly beginners, wonder if they can use large spools of thread on their machines.

Yes, is the response.

A spool holder is a piece of sewing equipment that you’ll need to make your job easier. A single sewing project, such as constructing a dress, necessitates a large amount of thread.

You’ll keep stopping to change threads using the little-size threads that fit in the sewing machine. Use a large spool to avoid wasting time. You’ll need a spool holder if you’re using a large spool instead of a small one.

You can run a large spool on your sewing machine with ease and convenience if you use a spool holder. 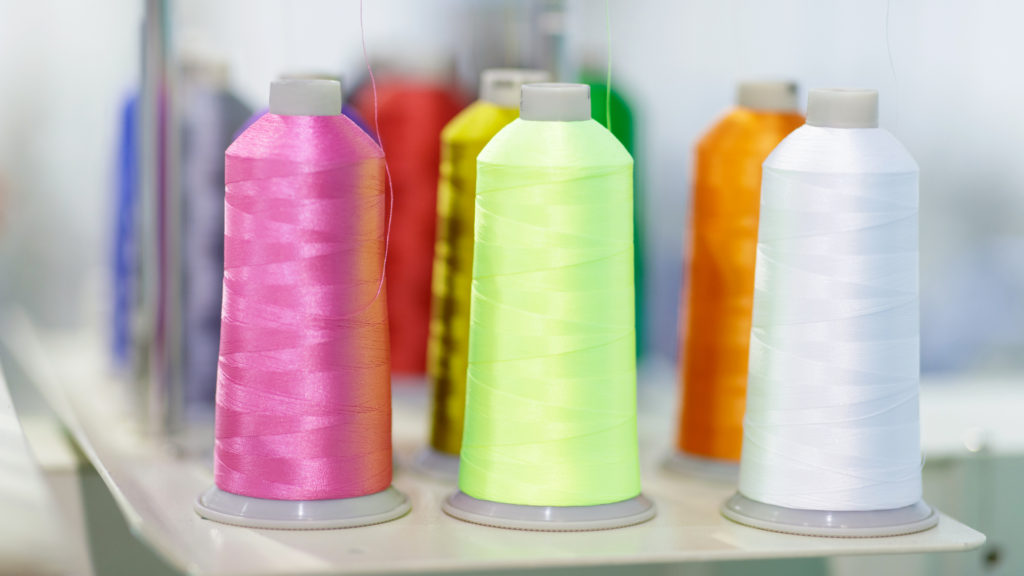 Place The Spool On The Floor

Placing a large spool of thread on the floor is one of the ways to use it regularly. The thread is long enough to reach your machine with ease.

Furthermore, the floor is a table; thus, the spool is unlikely to fall. To enable smooth movement and proper threading and stitching angles, pull the thread over a chair.

Use A Makeshift Or Homemade Spool Holder

Thread on large spools saves time and money as you don’t need to buy another spool holder. You may make one out of things you already have around the house.

A mug from your kitchen is one of the most straightforward handmade spool holders. Take a cup from the kitchen and place your spool inside. It will give the necessary support to prevent your spool from falling as you sew.

You can also use a wire to make a DIY spool holder. As it attaches to the sewing machine, ensure it has a section through which the thread runs. Attach a base to the wire to ensure that it is stable.

You can construct a low-cost DIY spool holder at home. To make them, you will utilize items that are readily available in your home.

Use Directly From The Large Spool

You may use your large spool of thread directly if you have a large working area. Place the cone thread precisely behind the sewing machine’s head.

Transfer The Large Spool To A Smaller Spool

Another option is to transfer thread from a large spool to a smaller one. It is a basic procedure that you can do before sewing.

This procedure ensures that you can use your sewing machine as intended. There will be no threads to get in the way of your work.

The disadvantage is that you may have to stop and transfer the thread to the smaller spool frequently. Do this as soon as your small spool of thread runs out.

You can do this manually if you like, but you can also choose not to. You can also wind some thread onto your little thread spool using your bobbin winder.

When you start the sewing machine, the process will proceed on its own. When your spool is full with thread, stop. You can build multiple little spools, so you don’t have to waste time transferring each time your threads are finished.

There are a plethora of threads to choose from for your sewing machine! There are many different thread types. Also, they come on a variety of spools and can be coiled on the spool in various ways.

Let’s have a look at how threads are wrapped on a spool before we look at the best ways to attach thread spools to your sewing machine. Generally, thread is wrapped in a cross-wound or stacked thread.

On the spool, the cross-wound thread will make an “X” pattern. Take note of the various spool kinds; some have one larger end, while others have the same size on both ends. There are also cross-wound thread cones that are too large to put on the sewing machine that you can use. 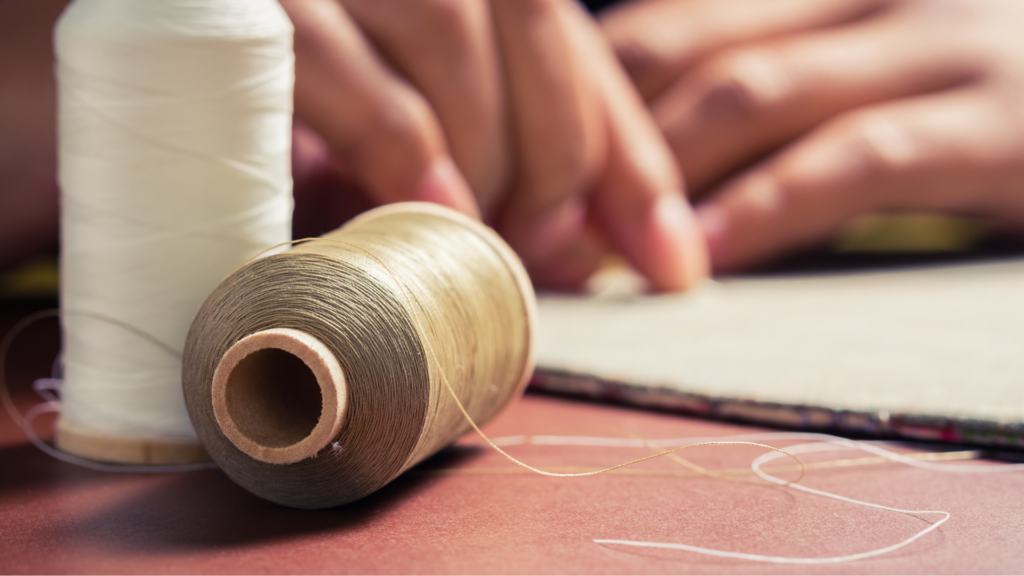 How To Mount Cross-Wound Threads

Cross-wound threads operate best when fed from one end of the spool. You can use your sewing machine’s horizontal spool pin and a free-standing thread stand. But make sure they are compatible with cross-wound spools. You may also use a sewing machine-mounted thread stand.

Stacked thread is coiled around a spool so that it stacks up, one row on top of the other. It makes lines parallel to the spool’s ends. Stacking thread spools are usually symmetrical on both ends.

How To Mount Stacked Threads

A spool cap is only used in this circumstance to keep the spool from spinning off the horizontal spool pin. Place the top thread guide near the flat spool pin at the end of your machine and begin threading it through the machine. You’re now ready to start sewing!

Sewing allows you to take control of a tight decorating budget. When you sew simple clothing, it lets you be creative. It is a fun thing to do, especially if you know what you’re doing. It is more fun if you don’t have to change threads frequently; hence, large thread spools.

How to Easily End A Stitch on a Sewing Machine

Why Is My Sewing Machine Sewing Backwards?

Types of Sewing Machine Threads: Everything You Need to Know [Part 2]

10 Most Popular Types of Sewing Machines

How To Thread A Mini Sewing Machine Easily